Review: Taxi Driver
Trevor Lynch • January 1, 2021
• 2,300 Words • 276 Comments • Reply
It began with Dylann Roof. Since then, the Molotov cocktail of autism, inceldom (involuntary celibacy), gallantry, vengeance, and mass murder has exploded with such regularity that I keep dusting off a boilerplate article to condemn it whenever the perpetrators are connected with White Nationalism. But even with Roofâs case, I felt that I had seen... Read More

Review: Fight Club
Trevor Lynch • June 12, 2020
• 3,000 Words • 131 Comments • Reply
Whatâs philosophical about Fight Club? Fight Club belongs alongside Network and Pulp Fiction in an End of History film festival, because it beautifully illustrates ideas about human nature, history, and culture from Hegel and Nietzscheâespecially as read through the lenses of Alexandre KojÃ¨ve and Georges Bataille. Prehistoric society is relatively egalitarian and focuses on the... Read More Blade Runner
Trevor Lynch • October 7, 2017
• 2,700 Words • 1 Comment • Reply
Ridley Scottâs 1982 movie Blade Runner is a science fiction classic and surely the directorâs finest work. Blade Runner excels on all levels. It is a highly imaginative vision of the future realized with a stunning visual style. The script is intelligent, even poetic. The cast is uniformly strong, with a number of powerful performances,... Read More 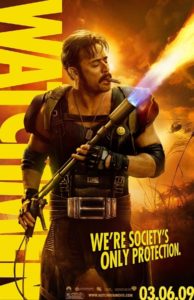 Watchmen
Trevor Lynch • May 4, 2017
• 4,800 Words • Leave a Comment
Watchmen is one of the most thoroughly Right-wing, even fascistic works of recent popular culture, despite the right-thinking Leftism of the creators of the original graphic novel, Alan Moore, who wrote the story, and Dave Gibbons, who illustrated itâand of Zack Snyder, who directed the movie adaptation, which to my mind is the greatest superhero... Read More
"Rightwing Cinema" Items Across Entire Archive
PastClassics