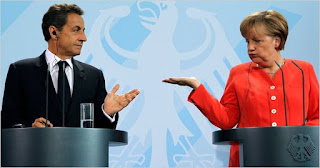 After a tense week with world markets teetering on the edge of collapse Angela Merkle finally met with her French counterpart Nicholas Sarkozy and they ended the seventh month chill in their once cozy relationship. According to The Independent, they faced a serious impasse regarding bank haircuts in the “dÃ©jÃ  vu all over again” Greek financial crisis. Sarkozy fought tooth and nail to guarantee that the largest holders of Greek debt, the French banks, wouldnât get a clipping. Merkel made a valiant effort to demand accountability from the banks but she finally caved in, giving great comfort to the second largest holders of Greek debt: the German banks.

One key question is missing from the discussion of the Greek sovereign debt crisis. Imagine a close friend is moaning non-stop about a debt owed to them that looks like it wonât be paid. Worst of all they borrowed the money from someone else in order to lend it! Most attentive and caring friends would make that most indelicate but necessary of inquiries. Who did you borrow the money from?

We are blessed to have a corporate media so polite that they donât burden us with these embarrassing questions. Where did the French and German banks get the \$87 billion to lend the Greeks? They would have you think that these are the deposits of hard working Europeans, small businesses, corporations and maybe even tax revenue from governments. This is not the case. Banks use their assets as reserves against which they either âcreateâ money to lend or borrow “created” money from central banks, in this case, the European Central Bank. When buying government bonds, which supposedly have no risk, they use maximum leverage and actually have no reserve requirements.

As John Maudlin put it:

âWhy is Greece important? Because so much of their debt is on the books of European banks. Hundreds of billions of dollars worth. And just a few years ago this seemed like a good thing. The rating agencies made Greek debt AAA, and banks could use massive leverage (almost 40 times in some European banks) and buy these bonds and make good money in the process.â

This means that \$1 million in assets for a French bank could have been used as colleteral to borrow up to \$40 million from the European Central Bank to buy Greek bonds. And where does the European Centeral Bank get the money? They use a designer mouse from Apple and make a few clicks on a very hip computer. The bank does not lend any of its own money or that of its depositors, though they would certainly have you believe they did.

So what happens in the case of default? In the case of default, banking regulations demand that the bank place in reserve the amount of money it loaned out. This maintains the integrity of the money and deters the moral hazard of âprinting moneyâ.

Greece has a GDP of around \$300 billion and its federal budget deficit is close to \$425 billion. How will they ever pay this back if this year alone they will add another \$30 billion in debt? This money will never be paid back, but, then again, no one ever worked to earn it. Since it was made out of thin air why not just write it off?

This is the key question that Europe will ask as the austerity measures begin to fail. The problem isnât that the banks would collapse. It could be arranged so the banks donât take such a big hit to their reserverequirements. As the Financial Times notes, the examiners can look the other way, as if the loans were not defaulting. The real hit to the banks are the huge profits they will forgo for their shareholders. No oneâs money is lost, but the integrity of the banking system would be questioned and the curtain would be pulled on the great banking/political/corporate ponzi scheme. The alternative is a generation of austerity tocontinue to maintain the extravagant lifestyle of the richest 1% who own most of the equity in the banks. No one will be dying of hunger or begging in the streets if the banks have a few bad years.

“Until the control of the issue of currency and credit is restored to government and recognized as its most conspicuous and sacred responsibility, all talks of the sovereignty of Parliament and of democracy is idle and futile.â William Lyon Mackenzie King

Subscribe to All Robert Bonomo Comments via RSS
Personal Classics