Earlier, by Peter Brimelow: A Long Farewell To Donald Trump, Immigration Patriot. And Thanks. 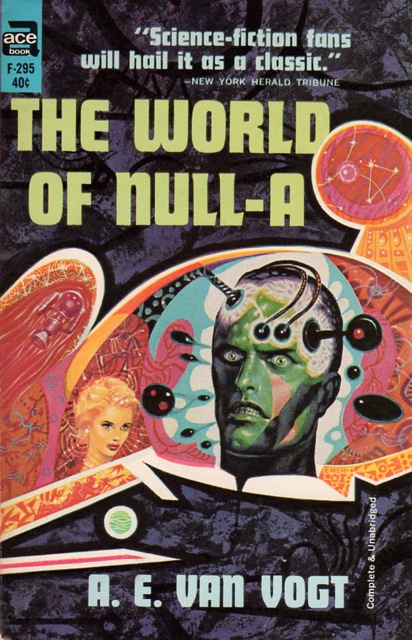 Back in the Golden Age of Science Fiction seventy-something years ago there was a novel everyone read, title The World of Null-A. It was about a future planet Earth that had moved on from simple Aristotelean logic to something more subtle. So the “A” there stood for Aristotle.

The author, A. E. Van Vogt, was actually promoting a trendy philosophical system called General Semantics. This was one of those pseudoscientific fads that were popular in the mid-20th century, like William Sheldon’s body-typing, Wilhelm Reich’s theory of orgone energy, Immanuel Velikovsky’s colliding planets, or J.B. Rhine’s parapsychology.

I’m a bit surprised to see that the Institute of General Semantics is still around seventy years later. A bit surprised, but only a bit; these fads never disappear completely. In New York City you can still find people practicing Freudian psychoanalysis. I bet there’s a Velikovsky discussion group active on the Upper West Side somewhere.

Well, I shall leave you to look up General Semantics in your own time You might also read The World of Null-A, which can still be found in the sci-fi shelves of municipal libraries. I don’t actually recommend you do either thing; but hey, it’s your time.

Much more relevant to current concerns would be a novel titled The World of Null-Tâthe “T” of course standing for Trump. We’ve not yet given up on Aristotle‘s logic, but we have, for better or worse, moved on from Trump’s Presidency.

What’s the verdict on that Presidency? My view: it has to be failure.

It’s not that Trump did nothing in those four years. He accomplished a great deal. The evangelist group Liberty Counsel has published a list covering fourteen pages. It’s naturally tilted towards evangelistic concerns, and is too heavy on neoconnery for my tasteâ”Restoring American Leadership Abroad,” etc.âbut there are some real useful actions in there. On immigration, for example, quote:

Removals of convicted criminal aliens increased by 14 percent from FY 2017.

President Trump has followed through on and exceeded his promise to roll back two regulations for every new one created.

The problem is, none of it has any permanence.

In the matter of enforcing federal law, Congress proposes but the Executive disposes. If DHS, under the President’s instructions, don’t want to enforce the people’s laws on immigration, they don’t have to.

And it’s plain they don’t want to. ICE agents will quickly get the message and head for the donut shop.

Similarly with Trump’s rule on federal regulations. It’s a sensible rule. If you want to add a regulation to the seventy thousand pages of the Federal Register, you first have to annul two existing rules.

Well, forget about that. One of Biden’s first actionsâon Wednesday, right after the inaugurationâwas to rescind that rule. If you want to saddle the U.S. economy with a vast labyrinth of mostly pointless regulations, mostly implemented as special favors to some rent-seeking lobby or otherâand that of course is what the new administration does wantâseventy thousand pages is not enough! We need more! It’s the same with cultural issues. Bidenâagain on Wednesday, so this is high-priority for himâsigned an executive order revoking Trump’s ban on federal agencies and federal contractors imposing Critical Race Theory training on employees.

So now, if you work for the feds or one of their contractors, you have to submit to being lectured by black grifters and white lunatics about the evils of whiteness.

The problem with those fourteen pages of Trump’s accomplishments is that hardly any of them had permanence. All the ones you’d stand up and cheer for were Executive Orders, that can beâand are beingârevoked with a sweep of the pen by the new Chief Executive.

Biden, of course, has the advantage here that nothing he does will be contested by the Kritarchs of our woke federal judiciary. Trump had only to pick up his pen in the Oval Office for some swivel-eyed federal judge in Hawaii or somewhere to pick up his pen and declare Trump’s action unconstitutional just by virtue of it’s being â¦ Trump’s.

That doesn’t let Trump altogether off the hook, though. To make changes you need laws, supplemented by the firm exercise of lawful federal powers.

In those areas Trump was hopeless. His party controlled Congress for two years, but the only law anyone remembers getting passed was a mild tax cut.

The firm exercise of lawful federal powers? Was it really the case last year, when anarchist mobs were burning and looting our citiesâincluding Washington, D.C.âfor months on end, that the Executive had no authority to restrain them? Of course it was not the case, as Senator Tom Cotton pointed out in a now-famous New York Times op-ed last June. Still nothing was done.

In factâand as a Trump voter it pains me to say itâin fact the feebleness, sloth, and incompetence of the Trump administration makes a sorry contrast with the vigor and resolution of this new one, the Biden administration.

Joe Biden promised he would do this, that, and the other “on Day One” of his administration. Sure enough, there he was on Wednesday afternoon doing them.

Didn’t Trump, on the campaign trail in 2016, also promise there were things he’d do on his Day One? Yes he did. How many of them did he do? Basically none. [Day One promises Trump keptâand those he hasn’t taken action on, by Rebecca Shabad, CBS News, January 25, 2017]

He promised, for example, to rescind the DACA boondoggle that gives work permits to illegal aliensâon Day One! Day One arrived, and â¦ nothing.

Trump’s administration did propose a phase-out of DACA in September 2017, which would have been about Day Two Hundred and Fifty, but Trump didn’t pursue it with much energy.

And again, on the firm exercise of lawful federal powers, look at how the new administration filled the streets of Washington, D.C. with troops for the inauguration.

I personally loathe and despise our managerial state with all its corruption, its lies and its arrogant pretenses. I have to admit, though, that once it’s got its hands firmly on all the levers of power, it gets things done.

The best lack all conviction, while the worst
Are full of passionate intensity.

As well as just not getting much done in any permanent way, Trump failed to tackle the Swamp in any way that seriously inconvenienced them.

If we are ever again to have Trumpism in the White House, it will need a cadre of Trumpists who know their way around, who are adept at the necessary political games. The last four years were an ideal opportunity to train up that cadre: to bring Trumpists in to the federal government at high levels so they could develop their skills.

But Trump didn’t attempt anything like that. The people he brought in were Swamp critters like Kirstjen Nielsen andâGod help us!âJohn Bolton. He supplemented their advice with soft murmurings from his daughter and son-in-law and their friends, metropolitan liberals all.

There were smart, politically savvy people Trump might have brought in. But not only did he not do so, he worked actively to destroy their political careers. You could ask Kris Kobach about it, or Jeff Sessions, or Steve King.

It may be that Trumpists have been infiltrated at lower levels of the bureaucracy. Politico.com reported on Tuesday that

A higher-than-usual number of Trump administration political appointeesâsome with highly partisan backgroundsâare currently “burrowing” into career positions throughout the federal government, moving from appointed positions into powerful career civil service roles, which come with job protections that will make it difficult for Biden to fire them.

The âdeep stateâ of loyalists Trump is leaving behind for Biden, by Alice Miranda Ollstein and Megan Cassella, January 19, 2021

Yeah, maybe. Some Trumpists at the very highest levels would have been better, though.

And even assuming these moles do burrow in, and don’t go native in those “career civil service roles,” given the aforementioned vigor and resolution of the managerial state, our new masters will spare no effort to root them out, up to and including truth serum in the White House coffee machines.

Meanwhile the borders and the jails are being thrown open, dissidence on the internet is being crushed, the DACA illegals are still working, and we still have 26,000 troops in South Korea, although no-one can tell me why.

So, in my judgement, a failure. Trump’s few small accomplishments are being swept away contemptuously by a vigorous new administration that is confident in the full support of our country’s Ruling Class: the federal bureaucracy, the big corporations, the media, the academy, Hollywood, Silicon Valley, the Kritarchy.

Trumpism is evaporating like the morning mist in a valley. It may take a while [Why Trumpâs Immigration Policies Will Be So Hard to Undo, by Tessa Stuart, Rolling Stone, October 13, 2020].But by noontime, when the sun of Woke Triumphalism reaches its zenith, nothing of Trumpism will remain; all will be forgotten. Donald who?

Welcome to the world of null-T.

John Derbyshire [email him] writes an incredible amount on all sorts of subjects for all kinds of outlets. (This no longer includes National Review, whose editors had some kind of tantrum and fired him.) He is the author of We Are Doomed: Reclaiming Conservative Pessimism and several other books. He has had two books published by VDARE.com com: FROM THE DISSIDENT RIGHT (also available in Kindle) and FROM THE DISSIDENT RIGHT II: ESSAYS 2013. The Fifth-Generation War on White People
First They Came for White Southern Malesâ¦
Marcus Apostate
• 348 Comments • Reply
← Crisis #1 for BidenâDouble Jeopardy S...JANUARY DIARY: [14 ITEMS] Race Realism ... →
Hide 94 CommentsLeave a Comment
"The World of Null-TâNext Time, We Need A Cadre Who Know Their Way Around"
• 94 Comments
Commenters to Ignore
Commenters to ignore (one per line)

Subscribe to All John Derbyshire Comments via RSS
Personal Classics