The take-no-quarter Polish presidential election campaign ended this week with backers of incumbent Andrzej Duda insinuating that his rival would sell out the country to Jewish interests.

It’s a dangerous tactic in a country with a long tradition of anti-Semitism, but something that appeals to the country’s hard-core nationalist voters, crucial in a race that polls show as a dead heat between Duda and liberal Warsaw Mayor RafaÅ Trzaskowski ahead of Sunday’s election.

JarosÅaw KaczyÅ ski, the leader of the ruling Law and Justice (PiS) party, made a rare campaign appearance late Thursday, taking part in an interview at an ultra-Catholic broadcaster, where he accused Trzaskowski of favoring the payment of restitution to Jews for property lost during World War II.

“Only someone without a Polish soul, a Polish heart and a Polish mind could say something like that,” KaczyÅ ski said. “Mr Trzaskowski clearly doesn’t have them, seeing as he says that this is open to discussion.” 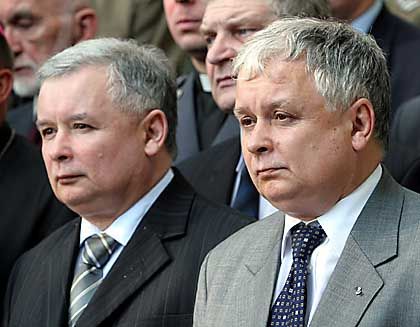 President Kaczynski is most memorable outside Poland as the twin brother of fellow politician Lech Kaczynski, who sadly died in the Smolensk air disaster in 2010.

Polish state television, which is acting as a cheerleader for Duda, has hit similar tones â asking if the Warsaw mayor “will fulfill Jewish demands.”

In the past, Trzaskowski has said “of course we have to talk to Jewish groups and try to resolve this.”

So is this anti-Semitism or a plausible critique? The âslippery slopeâ may be a logical fallacy, but itâs absolutely a social/political reality.

The issue of Jewish property restitution has been bubbling under the surface of Polish politics for years, and governments of both the left and the right have dodged the issue.

Before the war, about 3.3 million Jews lived in Poland, and about 90 percent of them were murdered in the Holocaust. Many of the homes and businesses they left behind either became the property of the state or were taken over by ethnic Poles.

Poland is the only post-communist EU country not to have passed a property restitution law. The official Polish position is that Jews were citizens of prewar Poland, and their heirs can fight property claims in the Polish courts like everyone else. However, many of these cases are very difficult to litigate and have stalled.

As well, Jewish groups want some form of restitution for the property of millions of Jews who died with no heirs because their whole families were wiped out. Polish law doesn’t recognize such a community right, as people who die with no heirs lose their property to the state.

The rub: the Poles still believe in the traditional Western notion of individual justice, as against the Levantine notion of collective tribal justice.

“I will never sign a bill which says that we will treat the inheritance of people from one ethnic group more favorably than from others,” Duda said this week, adding: “Let the one who started the war pay compensation.”

Well, except where the Germans are concerned!

The question troubles Poland’s relations with the U.S. and Israel, both close Polish allies. The U.S. Congress passed the Justice for Uncompensated Survivors Today (JUST) Act in 2018, under which the U.S. State Department has to report on progress made on property restitution in 47 European countries, including Poland. Last year, U.S. senators signed a letter demanding Secretary of State Mike Pompeo “act boldly” on the issue.

Eastern European governments always face such foreign pressure from the U.S. State Department, the European Union, and assorted NGOs. Many in the Middle East and Eastern Europe come to an early understanding of the power of ethnic lobbying in the U.S. when they witness the State Department effectively acting as a branch of the Zionist lobby and the holocaust industry.

The EU has been trying for years to cut off funding to Hungary and Poland â which is very substantial, billions amounting to 2-2.5% of GDP â to punish them for adopting âilliberal democracy.â These attempts have regularly failed because such a move requires the unanimous decision of 26 out of 27 EU countries, and Hungary and Poland can always be counted on to veto on behalf of the other.

The PiS government promised to pass a property restitution law, but like its predecessors balked at the cost.

The issue was seized on by Krzysztof Bosak, a right-wing candidate who scored 6.8 percent of the vote in the first round of the presidential election held June 28.

He insisted that Poland “will not pay reparations for World War II,” adding: “In a legal sense, Jewish claims aren’t any sort of ‘compensation,’ and only an attempt at a capital transfer.”

Both Duda and Trzaskowski are trying to lure Bosak’s voters, with the Warsaw mayor appealing to their economic liberalism, while Duda plays up their common nationalistic views.

In the event, Duda was re-elected with 51.2% of the vote. The campaign proved extraordinarily polarizing and, given the pro-LGBTI Trzaskowskiâs strong showing, suggests nativist and conservative populism may not have solid foundations in Poland.

By the way, the Times of Israel has reported that Dudaâs prime minister, Mateusz Morawiecki, is of Jewish descent, making a Duda rather ineffective anti-Semite. But the claim is disputed. Bitter Tantrums and Buried History
The Current Holocaust Controversy Between Israel and Poland
Max Denken
• 622 Comments • Reply
← Flemish Nationalists Restore Congo Monu...INFOGRAPHICS: French Government Visuali... →
Hide 58 CommentsLeave a Comment
"Will the Poles Have to Pay Up to the Jews?"
• 58 Comments
Commenters to Ignore
Commenters to ignore (one per line)