There is no limit to misjudgement. If the psychic curiosities in the Federal bunker start a war with China, or push Beijing into starting one, it will be blamed on a proximate cause, such as a collision of warships after which some lieutenant who joined on waivers lost it and opened fire. After all, historians have to write about something. The causes will actually be deeper and more complex.

To begin, people are cerebrally arranged to form groups–âpacksâ is a better wordâand fight with other groups. This is dimwitted, but so are people. The urge manifests itself in wars, political parties, football, teenage gangs, and contract bridge. It is not rational. In football, armored mercenary felons having no relation to the cities they represent, battle other felons from another city, most of whose citizens would not let their daughters within a parsec of said felonsâall this while the fans scream in adrenal murderousness. It is just what we do. At the national level, it is called âpatriotism.â

Territoriality is part of the disorder. Human mindsâthe phrase may be an overstatementâseem intended for small wild groups for whom protection of hunting grounds might be important. When a Secretary of State embodies this instinct, he may, for example, confuse Asia with a patch of woods rife with deer. An instinct well suited to one situation is applied to another to which it isnât.

But why do Americans regard China as an enemy? Partly because the vast military sector of the economy needs an enemy as a budgetary pretext. This is often said. It is also true. Since none of the anointed enemiesâRussia, China, Iran, Cuba, Venezuela, North Koreaâdoes anything to threaten Americans, a drumbeat of media about largely imaginary menaces is needed. And provided.

At a somewhat deeper level, it is again the pack instinct. Conservatives in particular tend to see the world in terms of tribes, countries, or faiths presumed hostile. Even though the public has almost no knowledge of China, or because of this, it can quite easily be persuaded that China is very dangerous. People can then easily begin clamoring for war and, politicians being politicians, they will not risk votes by pointing out the stupidity.

But let us go back to the collision of warships. Why would a diversity-admit junior officer open fire on China? Proximately, because he is frightened and panicky. A bit more remotely, because he has been told over and over and over that the Chinese are dangerous and aggressive and want to do terrible things, seldom specified. The military tells them this because you cannot prepare the troops for war by telling them that there is no reason for it.

Why would a President allow a war, knowing (if in a lucid moment) that it would produce absolute unshirted havoc in the economy even if it didnât go nuclear? He wouldnât. That is, he wouldnât all at once choose Armageddon. But he couldnât afford to seem soft on China, not with the midterms looming, so he couldnât back off. If in the ensuing shootout the Navy got trounced, he most assuredly couldnât drop the matter, and would have to double down. So, of course, would the Chinese for the same sorts of reasons. Off to the races.

Deeper in the forest of causation is that the pathologically aggressive, amoral, manipulative, and crafty tend to rise to power. We select as rulers those who are least fit to rule. In America this is often done a bit differently, with the unscrupulous and powerful choosing cardboard leaders whose strings they can pull. The effect is the same.

Why would war seem reasonable? Because Americans have never seen one, and believe their forces to be invincible. If you think that you canât lose a fight, why avoid one? And because those in comfortable circumstances know that a war in Asia would be fought by the lower economic classes, about whom they care nothing and donât much like. American elites do not fight. Note the list of draft dodgers during Vietnam: Bush II, Cheney, Bolton, Trump, Biden.

These men, knowing almost nothing of the military, war or, very likely, military history, are quickly hijacked mentally by the Pentagon. The firm handshake, the steely gaze, the clean shaven, confident, and patriotic warriors (if only via Powerpoint) are impressive to pols whoâ¦well, you knowâ¦havenât done that. They project strength and realism, without necessarily having either. Listening to them, you can easily get a sense of being accepted into a special, manly club. They say that America has the most powerful, invincible, best trained, tra la, tra la, and if you havenât been there it is easy to believe. The Chinese? A cakewalk. Iran? Coupla weeks.

Another reason for easily blundering into a war poorly understood is the very low quality of American government. Congress and the President are chosen by popularity contests, not according to competence. A congressman who worked his way up the political ladder in Wheeling or Baton Rouge knows state politics. He is unlikely to know anything about the first Island Chain or what a terminally guided ballistic missile is. A friend in a position to know estimates that ninety percent of the Senate do not know where Myanmar is. No one without a grasp of geography has more than a childâs understanding of military, economic, or strategic reality. But they vote on these things.

Sez I, we are well and truly screwed. But there is little we can do about it.

The below is a collection of non-political pieces over the years that I think people might find enjoyable. 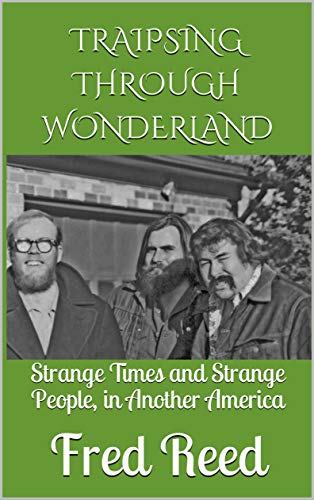 Amazon: âChronicles of a wild life in biker bars and the fleshpots of Bangkok, of years of solo hitchhiking across America, of a Southern boyhood of drag racing in old wrecks and guns and beer, of Marine Corps boot camp and Moonâs strange church, of scuba diving the deep walls of the Caribbean and cave diving in Mexico, of life on staff at Soldier of Fortune magazine and nine years as police reporter for the Washington Times in the weird, sad, and often unbelievable urban Petri dishes of the big cities. Politically incorrect and evilly funny, Fred takes no prisoners. He skews with murderous wit things he doesnât like, which are many: pols, talking heads, officious do-gooders. He has a soft spot for things he does like, such as dogs, drunks, bar girls, and ambulance crews, of all of which he has known many. His work has appeared in Playboy, Harperâs, the Washington Post magazine an op-ed pages, and suchlike stations of the literary cross.the literary crossâ

Write Fred at jet.possum@gmail.com Put the letters pdq anywhere in the subject line to avoid autodeletion

American Pravda: "The Truth" and "The Whole Truth" About the Origins of Covid-19
Ron Unz
• 283 Comments • Reply

American Pravda: Covid-19, Its Impact and Origins After One Year
As We Rapidly Approach a Million American Deaths
Ron Unz
• 974 Comments • Reply